With the 2018 Detroit Autorama in the books, and all the awards handed out, a 1957 Chevrolet from Colorado took home top honors. For those unfamiliar with the custom car world, Detroit Autorama dishes out one of the biggest accolades in the industry — the Don Ridler Memorial Award. The award celebrates craftsmanship as well as creativity, though all the finalists — known as the Great 8 — are incredibly well thought-out and radically executed builds.

Aside from the prestige of getting your name and car in the record books as a Ridler award winner, you also get a check for 10 grand, a jacket and a trophy, which isn’t exactly going to do much to help the checking account but it will make the ride home — with the car in a trailer behind — that much more satisfying.

Without further ado, check out the Ridler award winner below, along with the rest of the 2018 Great 8 finalists. 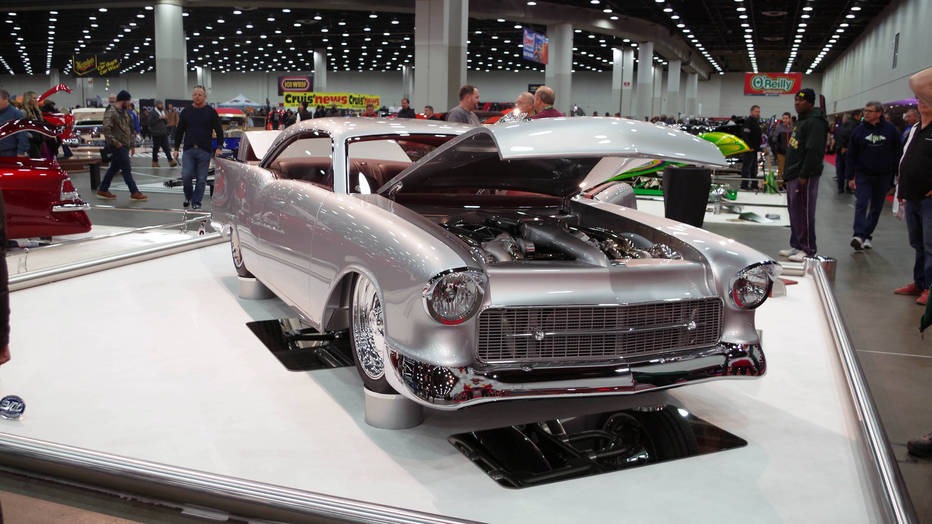 This heavily modified Chevy was put together by the team at Johnny’s Auto Trim and Rod Shop in Alamosa, Colorado, for Greg Hrehovcsik. Every panel of this Chevy has been heavily massaged. A custom top panel joins the rest of the body, which was channeled over the frame rails and sectioned. Sectioning, for those who don’t know, is removing material from the side of a car to make it lower — obviously that means reworking every piece of sheetmetal.

Powering the Chevy is a 515-cubic-inch Chevy big block that’s force-fed by a pair of turbochargers. The combo is apparently good enough for 1,043 hp, mated to a three-speed automatic transmission — a TH400, for those counting — that feeds power to a chromed rear end.

The list of custom-made parts is too long to list, even for the internet, but safe to say if it’s on this car, you can’t readily find it.

This 1967 Chevrolet Camaro might have one of the most polarizing names given to a custom car, but its supercharged small block and exquisite interior should make it a hit regardless. The redesigned front and rear sheetmetal are less subtle than the rest of the car’s tasteful tweaks. The metal work, inside and out and top to bottom, was all smoothed before it was covered in a custom-mixed PPG color called sandstone gold.

The supercharged LT1 Chevy small block is less advanced than its similarly named modern counterpart but sports a modified Magnuson 2300 supercharger and a Fast XFI fuel injection system. According to the car’s show card, it relies on methanol injection to keep the engine happy.

For two years, the Continental Mark II laid claim to being one of the most luxurious cars on the road. The elegant styling, opulent interior and powerful 368 CID Lincoln engine was a formula for a world-beating luxury car. The team at Metal Union and Ryan’s Rod and Kustom went to work to enhance the car’s lengthy looks, while adding neo-futuristic styling and modern enhancements. The antiquated pushrod engine is out — replaced by a DOHC 5.0-liter Ford Coyote mill, sporting Continental-inspired valve covers.

The top was chopped 2-inches, with another 0.75-inches removed from above the car’s drip rails. Traditional modifications like removing the badging and door handles are present, as well as extended quarter panels, reshaped rocker panels and reshaped bumpers. The notable bump on the Continental’s trunk lid was removed, which further enhances the car’s length.

Covering all the modifications is a custom candy red over a metal flake base. There’s a matching Squier Stratocaster in the trunk, which is paired with an interesting solution to a common air ride problem: The builders built a fake fender amplifier to cover the rear-mounted air tank.

After a slight drought in Camaro love from the Ridler judges, this year’s second Camaro in the Great 8 was built by the not-so-local Detroit Speed. Despite its name, Detroit Speed brought this Camaro up from its shop in North Carolina. During the car’s 13-year build, every piece of steel was reshaped and refined — enabling a 47-inch overall height without any compromised suspension performance.

Powering the custom Camaro is a supercharged Chevy LS2 built by Keith Urban. The engine breathes through a custom air inlet. The aluminum engine block was smoothed, polished and painted to match the exterior.

Custom gauges relay all the engine’s information to the driver, who will be sitting in a completely custom interior that was put together by M&M Hot Rod Interiors. The stitchwork is fitting of car’s ambitious name.

This 1940 Ford is one of the least extreme customs that competed for this year’s Ridler award, despite being powered by a fuel-injected big-block Chevy that could have been found in a first-generation ZL1 Camaro. The tan interior compliments the dark blue paint, which has a matching upholstered panel underhood. The buggy-sprung I-beam front suspension was cut away, with a double-wishbone front suspension suspended by coil-overs in its place.

The factory 1940 Ford headlight assemblies and sealed beam lights were replaced with wacky LED Halos that sport the Ford V8 logo in their middle. Maybe not the most sensible modification, but it probably awarded Mr. Hotaling some extra points on his scorecard.

If you’ve followed Jason Graham Hot Rods for any time at all, you’d know he had a hand putting this radical 1934 Ford together without even seeing the build sheet. The radical proportions come from channeling the body over the frame, chopping the roof and completely reworking this Ford’s antiquated suspension. Helping it look longer, Graham stretched the cab by 1.5-inches to give the truck more visual weight and made it easier to enter and exit. The team also raked the A-pillar back, making the truck look more sleek and modern.

Powering this hot hauler is a 347 CID small-block Ford stroker that’s mated to a five-speed manual transmission. Those ponies go from the overdrive transmission to the quick-change rear end that’s easily seen through the truck’s bed. Custom one-off wheels round out the pickup’s show-ready provenance.

The 1939 Ford sedan delivery might not be everyone’s first choice for a high-end custom, but Dan Wickett at Hot Rod Construction in South Carolina turned this work-ready wagon into a Great 8 finalist. A luxurious leather interior replaces Ford’s original mohair covered bench. The Ford’s original dash was mostly retained, at least in concept. The dash was reconstructed and turned into a piece of wooden art fit for a Ridler contender.

Wood was used behind the seats, in the sedan delivery’s loading area. Much like a pickup, the wooden slats are finely finished with enough sheen to never want to put anything in its bed. The folks at Hot Rod Construction also flipped the door hinges.

Hoping to work the same magic as the 2016 Ridler winner, this 1936 Pontiac sedan built by Legens Hot Rod Shop blended art deco styling with 21st century modernity. The Pontiac’s interior is minimalist, save for the large swaths of leather covering nearly everything except the globe-like gauge cluster planted in the middle of the dash.

The white paint is offset by the Pontiac’s signature waterfall grille, which was mimicked on the supercharger cover and the rest of the car’s body. Powering the Pontiac is the same modern supercharged LT4 you’d find in a Z06 Corvette at your local Chevy dealer.

Like most high-end custom builds, the team at Legens started with a low-mileage, unmolested example before reworking every part of the car.

The Clutch Artists are a non for profit organization. We preserve the history of the automobile in America and in Buffalo New York. We have been around since 1954. We put on car shows so people can see some cars that they might not have seen before.